Today we visited Cardiff Bay.  To read about our visit please go to the post ‘If you’re ever in Cardiff Bay...’ on my Ngakma Nor’dzin blog. 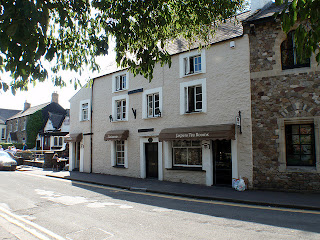 In Llandaff there is a delightful tea rooms called Jaspers.  This is the sort of place that we always frequent while on holiday but often cannot find near to home.  So it is lovely to have Jaspers Tea Rooms within cycling distance—or even walking distance—of our home.  It is also close to Llandaff Cathedral and the walks thereabouts.  A great place for a Sunday afternoon visit. 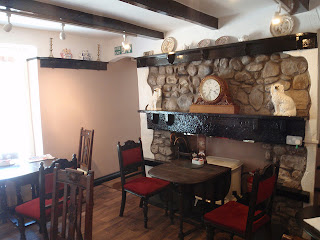 I had a good week in Cornwall at Surya Eco Yoga Camp.  All too soon it was time to go home.  I decided to break my journey again and leave on the Sunday evening, so that I would be home quite early on the Monday.  Please go to my Ngakma Nor'dzin blog for more information about this event.

I drove till I was getting close to the beginning of the M5 and followed a sign to a campsite.  I quite like simply following a sign to a site rather than booking in advance or hunting for a site in a brochure or online and then having to find it.  I like the spontaneity of turning off the road to an unknown site.

The site that I arrived at near Okehampton is called Bundu Camping and Caravan Park.  I did not like this as much as the site I stayed at on my outward journey.  I decided not to bother with electric hookup as I was only there for one night, it was an extra cost, and I had lived without electricity for a week already at the yoga camp.  This meant that I was on a pitch in what I found myself calling the 'poor end of the field'.  The pitch was okay—level and with water and bins nearby—but a long way from the facilities.  The site is long and thin with the facilities up the top end.

The lady who took my payment was coolly friendly and gave me a code for the toilet block.  I thought key pad entry for the facilities was a good idea.  There was also a shop at reception which would be convenient for a longer stay.  The toilet block was clean and well appointed and again I was able to have a hot shower without extra cost.

In the morning I was a bit startled when a man suddenly came into the ladies' facilities.  He was sorting out a problem for another camper, but I felt he should have ascertained that there was no one in there in a state of undress before he entered.

I was not too keen on this site.  I didn't feel welcomed.  The facilities were fine and there wasn't really anything wrong with it... I just wouldn't want to stay there for anything more than a journey's overnight stop.
Posted by Nor’dzin at 19:53 No comments: 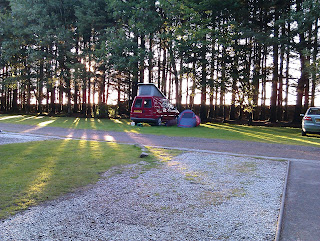 I recently spent a week in Cornwall living in the van and teaching at Surya Eco Yoga Camp.  Unfortunately I chose the same day to travel as a lorry caught fire in the Malpas tunnel, Newport, closing the M4.  This caused a horrendous traffic jam which I was stuck in for 3½ hours.  It took me as long to do the first 15 miles of my journey as it did to do the rest.  After the first hour of moving slowly I had to make the decision of going home or going on.  Listening to the traffic news I realised that it would take as long to get home and the tunnel would probably still be closed the next day anyway - so I decided to sit it out.  At one point the traffic did not move at all for about half an hour.

Once I got back onto the M4 at junction 24 it was plain sailing all the way.  By the time I reached north Cornwall however, I had been on the road for 6½ hours and decided to stop for the night. 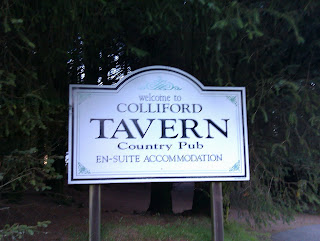 I turned off the A30 to St Neot and found Colliford Tavern.  As the sign says it is also a pub.  I thought it rather a delightful site with the pitches nestled under pine trees.  I liked the atmosphere of the shaded, wooded area.  The shower block was nearby and the path to it well lit.  I had a nice hot shower and settled down for the night.

This site does not get very good reviews at  ukcampsite.co.uk but I liked it.  It was clean, friendly and an attractive site.  I felt completely safe camping there on my own.  I generally prefer sites with minimal amenities however, and tend to avoid the ones that offer entertainment of any sort - so I can see that it might be a bit dull for some people.  It is the countryside and being in nature that I want to experience when camping, not watching TV or similar.  I enjoyed the rabbits frollicking under the trees in front of the van.  It would be a good site for exploring north Cornwall.

I find it interesting that nowadays free hot water is common at campsites, whereas it used to be a rarity.  You always used to have to get a token or have money for a slot to have a shower.  British camping is becoming more civilised.
Posted by Nor’dzin at 19:26 No comments: 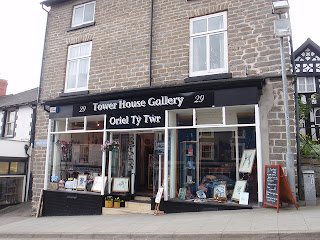 We called at a delightful café on our way back from a week of camping in Shropshire.   It is called the Tower House Gallery/Oriel Tŷ Tŵr in Knighton/Tref-y-Clawdd on the England/Wales, Shropshire/Powis border.

We had soup and bread, followed by cake.  The bread was unusual and especially nice.  When we commented on how good the bread was, they gave us the recipe which  they are happy to share the recipe with anyone. 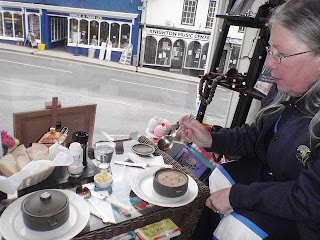 Mix all the ingredients into a sticky dough and pour into a lined 2lb loaf tin.  Leave for approximately 15 minutes in a warm place until the dough rises to just above the tin.  Bake for 1 hour at gas mark 6/200C. 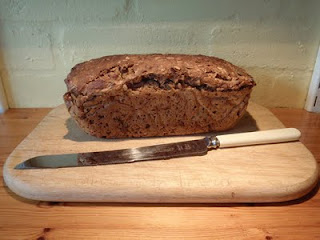 I've made the bread at home and it makes a most tasty loaf. 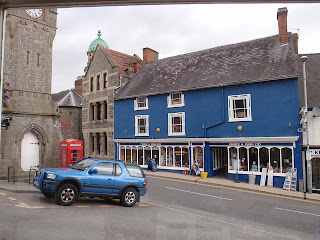 Across the road from the café is an interesting ironmongers called Prince and Pugh Ltd.  We bought some enamel plates for the van. 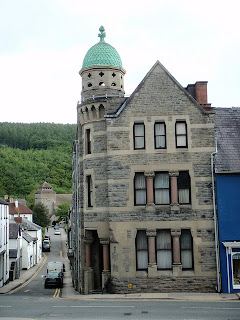 There are some interesting roads and buildings in Knighton.  It is well worth a visit.
Posted by Nor’dzin at 21:47 No comments:

Having set up camp on arrival on Good Friday, we then went into Church Stretton for dinner.  After eating we had a look around the town.  It seems a pleasant place with many interesting and historic buildings.  We were treated to the scenic route back to the van over the moorland above Church Stretton.  It is a beautiful area nestled in the Shropshire hills. 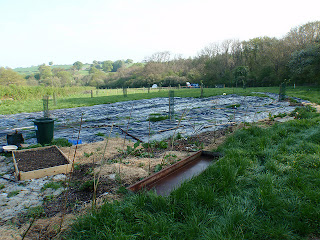 We had a comfortable night camping and enjoyed seeing round our friend's land the following morning.  It is an interesting venture.  He is creating a forest garden and his partner is converting the stable buildings for growing mushrooms.  We have taken to calling our friend 'The Squire' now that he owns a patch of land.  His methods are 100% organic and aim to disturb the land as little as possible as its current status is transformed from grazing land into horticulture.  The Squire has planted a great many trees of many varieties - choosing some species for their production and others for the way in which they can benefit the others.  It is a long term project and will not start to become viable for at least four years. 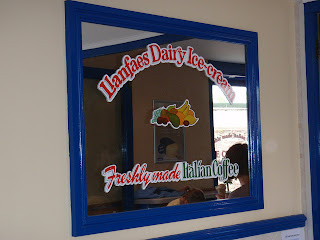 After our guided tour it was time to pack up and prepare for the drive home.  After a brief panic not being able to find the van keys, and then a relaxing cup of tea, we set off, travelling home on a slightly different route via Llandrindod Wells to Brecon.  This time we did not find a tea room unfortunately - they do not seem to be so popular in Wales as they are in England, and most of the journey home was through Wales.  At last we did find somewhere nice to stop for refreshments - The Llanfaes Dairy Icecream parlour, 19 Bridge Street, Brecon, LD3 8AH.  Their orange and mascapone is the most divine icecream I have ever tasted.  Sadly, with the weather so hot and still being a fair way from Cardiff, we decided it would not be possible to get a tub of icecream home without it melting.  Llanfaes do not supply outside a 20 mile radius of Brecon, so we may have to visit Brecon more often to taste their icecream delights.
Posted by Nor’dzin at 21:13 No comments: 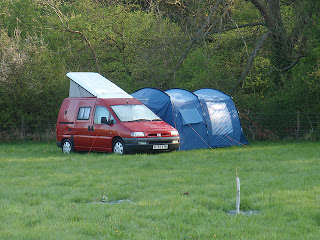 This blog has been severely neglected because we have had little time for expeditions over the winter.  We have however been working on improving the van and making it more comfortable for camping.  The layout in Pema the Peugeot is that the front seats swivel and the back seats flatten to join up with the front seats to make two beds.  This makes too very narrow and slightly short beds however which are not entirely comfortable.  In so many ways this van is perfect for us that we have wanted to invest in improving it. The awning we kept from Bertie is great in some ways but really too big for this smaller van.  Having a small fridge is cute, but takes up a lot of space. 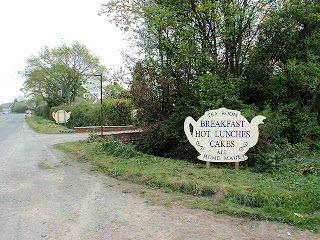 So we have made some changes.  First we bought a new awning.  It is only slightly smaller than the old one (which we have decided to keep as well) but has a sewn-in groundsheet, a detachable inner bedroom and is of a lighter material.  We bought suction clamps for attaching it to the van and this works well.

Next we removed the fridge and gave it to someone on Freecycle.  This liberated space has made a nice little wardrobe - sufficient for four or five coat hangers.

Now for the sleeping arrangements.  We discovered that a 19L Really Useful Box fitted snugly between the seats and was about a cushion's depth lower than their height.  I made a cushion of the right size and the three boxes in a row with it on top turns the two narrow beds into one reasonable width bed.  It will still be a bit snug for the occasions when we have to both sleep in the van, but usually one of us sleeps in the awning, so it is roomy for one. 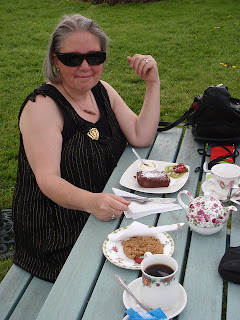 So with everything sorted out it was time for a try out.  On Good Friday we travelled up to Shropshire to camp on a friend's patch of land.  We took a motorway-avoiding route to the site, just north of Church Stretton, and were lucky to meet little traffic.  We stopped at a delightful tea room just outside Winforton on the A438 in Hereford.  I give The Buttley Tea Room 5***** even though the flackjack was a little too sweet for my taste.  The garden is pretty and well-kept.  The refreshments were presented beautifully in nice crockery and with fresh fruit decorating the plate.  The staff were most pleasant and accommodating.  We shall certainly be calling there again next time we are heading that way.  They do not seem to have a website but their postcode appears to be HR3 6EA.

The transport is our motorhome, and the delight is the fun of our adventures. We bought Bertie, an ancient Talbot Express in May 2009 to find out how we liked having a motorhome. Sadly he had to go in March 2010, but Pema the Peugeot arrived. This blog talks about our expeditions.